The Mystery of Miss Tick 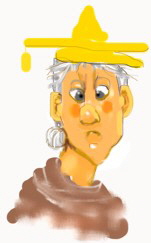 Miss Tick, the schoolmistress from the Seven Schools of Undergrowby, had spent her whole life at the school. Once, long ago, she had even been a pupil there herself. She was a very odd pupil, but a pupil nonetheless.Â She was a clever, bossy girl, tall, spotty and unattractive. No one ever knew her first name, because even as a child, she insisted on being called Miss Tick. Luckily for her she had no interest in being liked. She had no time for childhood friends, especially boys, but she was never really lonely because she had her eight highly intelligent pet rocks, all girls, who appeared blind to her faults and accepted her domineering ways with fortitude and good cheer.

Her pet rock-keeping was as perfect and duty-bound as her school work. She bathed and powdered the pet rocks every day, she made them a little hut to live in and each rock had its own matching school-hat, scarf, blanket and umbrella. Every Friday, without fail, she took them out of their hut, popped them in her pocket and took them along to the Rubble Club meeting. Responsible pet rock owners from far and wide brought their pet rocks to play together at the Rubble Club. They would all dine on Madge Dumpling`s rock cakes in the quarry mistress`s parlour, where all Undergrowby pet rocks are born.

Miss Tick was one of those members who kept herself to herself and had no time for gossiping with the other Rubble Clubbers. She was too busy eating rock cakes and making sure her girls were kept well away from those messy, naughty boy rocks.

If attending the Rubble Club was not made compulsory in the Rules of Ownership of pet rocks, she would never have been there at all. Whatever she did, it was clear to see, however difficult it may be, she was determined to do it perfectly and correctly by the rules, which of course is why she was always top of the class in every subject throughout her school career.

In no time at all, because of her excellence, she was moved up through the Seven Schools one by one, mastering all her subjects easily. Listening in, as they like to do, and memorizing everything they hear, the pet rocks became every bit as clever as her, if not cleverer, but no one would ever have guessed, because they kept it to themselves. They preferred to let Miss Tick, their dearest friend, take all the glory.

When she had passed through all seven schools, she was still too young to be a teacher, so they put her in charge of cleaning the dusty old school library. That meant she could keep reading and learning more and more as she dusted with her pet rocks rattling merrily in her pocket, keeping her company. Though Miss Tick was in the limelight and they were hidden away in her pocket, they were never jealous. They were always happy at their work as secret dusting assistants, only glad to be involved in some small way.

The oldest of the books were carved into stone slabs wedged along the walls of the library and stacked one on top of another like kitchen tiles from floor to ceiling. Miss Tick had to climb a ladder to dust and read them.

The most thrilling, witty and hilarious stories carved by the ancient stone slab-carving writers were, to Miss Tick`s annoyance, high up on the top row. Once, she and her pet rocks nearly fell off the ladder when Miss Tick, despite her best efforts, succumbed to a rare bout of hysterical laughter. Being a librarians assistant could be a dangerous job, so the pet rocks were relieved when Miss Tick was old enough to be promoted to junior teacher.

The First School, where Miss Tick began her career as a teacher, was the school of water management. Swimming, sailing, raft-making, well-digging, pouring, dripping, bathing, laundering, freezing, melting, umbrella-making, reflection-gazing, roof repairing and all manner of water-management techniques had to be covered in the First School syllabus. It was the busiest, most complicated class to teach, but Miss Tick excelled, competently but not quite single-handedly (she had eight pet rocks helping her, after all).

The pet rocks, however, dreaded her going to work every day. All that splashing, ugh! Pet rocks and water do not mix well, and they insisted on staying in their little hut in the stationery cupboard with their umbrellas up, thinking helpful, clever thoughts into the classroom towards her by the power of their minds until it was home time. It was exhausting work.

Luckily for them, Miss Tick was soon promoted to a nice dry classroom in the Second School, the Earth Management School. Amongst the rock specimens and soil samples of the Second School the pet rocks felt perfectly at home and hoped she would be promoted no more, but of course she was, and soon they all moved up to the Third School, the Plant Management School. The pet rocks were displayed in pride of place, arranged like a little rock garden amongst the lush greenery. Although they were much admired and petted by the pupils, they never became vain, unlike Miss Tick, who took to wearing flowers in her hat.

Next, they were promoted to the much warmer climate of the Fourth School, whose lessons were about fire management. Pet rocks, born in the glow of the fire in the Stone Quarry parlour, love a fire. It makes them relax and grow ever so slightly bigger as they do so, but who could imagine what effect the heat would have on Miss Tick? The flowers in her hat wilted, causing a brown stain which had to be covered by a fetching bunch of coloured ribbons. Her cheeks turned bright red and her heart fluttered a little from time to time when she saw the handsome postman marching up the hill every morning. Her heart, in fact, started to rule her head and one day, against all the rules, she opened a window while the east wind was blowing and, patting her beribboned hat flirtatiously, said “Good morning” to him.

The rush of air from the east fanned the flames of the fire to dangerous levels and Miss Tick was forced to ring the fire bell. The First School pupils ran uphill with their water buckets, but by the time they got there Miss Tick had composed herself and pretended it was just a practise fire drill. No one was fooled, least of all the pet rocks, whose job it was, of course, to know and keep all her innermost secrets.

Before she could burn down the Fourth School, Miss Tick was hurriedly promoted to the Fifth School, Treasure Management. Air was considered to be the most precious of the elements of nature, and more precious than diamonds or gold, so this school`s lessons were all about breathing techniques designed to use the air wisely. To breathe cleverly enough to pass their breathing examination, pupils were forced to learn all about the patterns and movements of air in the sky and in the body. If Miss Tick and the pupils had cared to simply watch and copy how a pet rock breathes, (hardly at all), they would all have been expert air managers in no time.

Next to air, the most precious treasures under examination in the Fifth School were snowflakes, which were notoriously difficult to manage without destroying them. The resulting slush all over the place was starting to make the pet rocks damp and mouldy, and the Fifth School had no stationery cupboard in which they could hide, so they were glad when Miss Tick moved up to the Sixth School.

The Sixth School was the School of Mysteries, and was positioned higher up the School Mountain of the Rocky Headlands. Very few pupils ever graduated up into this school, because the Fifth School exams were too hard for most to pass. (The snowflake task defeated most until they were too old to stay at school any longer.)

Miss Tick and her eight rocky little pals led the tiny class of Sixth Formers in the mysterious art of silently gazing upon natureâ™s wonders from the high moral ground of the Sixth School. The pet rocks were, of course, already masters in the art, and in their skilful presence, sitting silently and gazing into space soon came easily to the others who thankfully were sneaky enough to copy them.

The class learned the Silent Mysteries lessons so well, in fact, and became so wise so quickly, that Miss Tick was promoted to the head of the famous Seventh School, the school with a form but no name, which had been closed for many years due to lack of demand for its highly specialised mysteries.

No words were ever allowed to be spoken in the Seventh School, so it was a complete mystery what anyone was supposed to be learning there. It was a round building bathed in a bright bluish light from the sky, perhaps because it was built so high up on the mountain, and through its many windows, nothing could be seen, only emptiness, within and without. No one has words to describe what is there, but it is said that being in there can make you so light, you can float in mid air, and so peacefully at one with the sky that you might even disappear. This is exactly what must have happened to Miss Tick, because on the very day when she and her pet rocks took charge of it, they walked in and just vanished from sight. It was a mystery, sure enough.

A few weeks later, with the mystery still unsolved, during a very rowdy water-splashing lesson in the First School over which the young teacher seemed to have no control, a rattling noise started to come from the stationery cupboard. The cupboard door opened and out marched Miss Tick with her pet rocks and their pet rock paraphernalia rattling in her handbag. She said “Good day” to the startled teacher and as she swept through the classroom the rowdiness changed to silence and order was restored in an instant. She handed one of the naughtiest boys the mop and bucket with a charming smile, which was very unusual for her. Then she left the room and turned along the corridor, whence she disappeared once again.

Since then, Miss Tick appears in the Seven Schools whenever there is a job which only she can do, and she stays for exactly long enough to finish it and restore order throughout. Because of her well-timed, priceless talents and endless dedication to the Seven Schools, she was promoted (in her absence) to part-time headmistress. Apart from her school duties she still never fails to put in an appearance at the Rubble Club every Friday, and has been awarded a Rubble Club long-service badge of honour.

Wherever she goes when she disappears, selfishly, she never tells, She says it is her well-earned secret, and that of her pet rocks, who, unfortunately, are world-famous experts at keeping secrets. No one can get it out of them although it can never be said that the Rubble Clubbers have not tried.

Some things, sadly for the curious, are truly beyond words and even beyond our understanding. Amongst them must remain Miss Tick`s off-duty whereabouts, which, by way of comfort, is ranked as a minor mystery compared with the Dumpling Magic, and in order of importance, much further down the list of Official Mysteries of Undergrowby.