Snow White and the Misses Divine

The very boring Undergrowby Post Office, with its two bossy, stamping-mad postmistresses is just across the lane from the Stone Quarry Cottage, the swanky, grit-strewn home of the Quarrymistress and world-famous pet rock whisperer Madge Dumpling, the author of this story. Madge is the Chairman of the exclusive Rubble Club whose weekly meetings for devoted pet rock owners and their pets, are held in her parlour.
Unlike the dreary  Post Office, the Stone Quarry is a truly magical place where pet rocks are hatched out from quite ordinary-looking pebbles, rocks and stones. Although she looks like any other Growby from the land of Undergrowby, only the six inch tall, brown-haired Madge is special. Only she can tell the difference between a common barren rock and a ripe friendly one which is ready and willing to be hatched out into a pet rock. Only she has inherited enough of the magical Dumpling know-how to get them all to hatch them out.
At any one time, thanks to Madge’s constant hard work and dedication, hundreds of newborn pet rocks will always be crammed neatly on the windowsills and mantelpiece of the Stone Quarry Cottage waiting to be adopted. It is a well known fact that a pet rock can turn any Undergrowby gnome`s house into a home, and will bring great good fortune to its owner, sometimes a fortune which is stupendously great and good if that owner adores his pet and pampers it properly. That is why pet rocks are always in demand and Madge’s lectures on pet rock care have such a following.
The Postmistresses across the lane, Hetty and Dora Divine, although they are called The Misses Divine, are quite unpleasant. For some strange, selfish reason they have never offered to adopt any pet rocks at all although they are just across the lane from Pet rock H.Q.. And they live in a great big posh Post Office where they could make room for hundreds!  Still, being so boring and unmagical themselves, they are probably just jealous of their talented pet rock whispering neighbour, Madge Dumpling. No matter how much they might wish for a nice little pet rock to cheer up their boring lives, they will never admit it and are too stubborn and set in their ways to come across the lane to get one. Madge knows this for a fact. 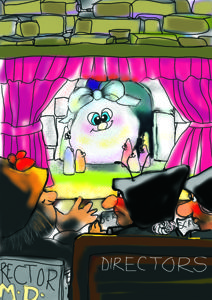