Pet rocks are born by the fireside in Madge Dumpling's parlour, where they would happily sit for ever if they could. Having sad that, they do love a night out with their owners. Undergrowby's favourite night spot is the Summerlands Bonfire party, held nightly in the far south of Undergrowby, whatever the weather. 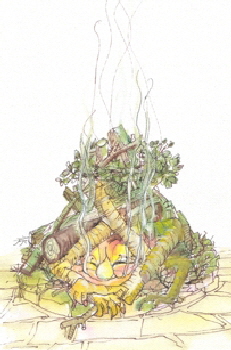